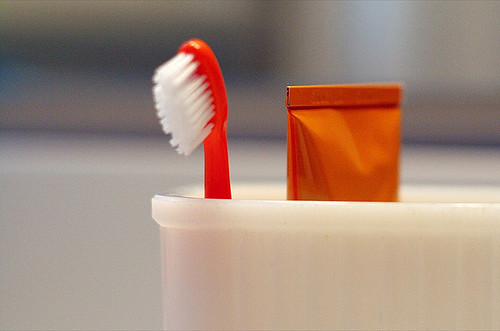 After you finish flossing or brushing, you notice a faint taste of iron in your mouth. Upon further inspection, you see that your gums are bleeding. You might start to panic, as the sight of blood in your mouth can be very off-putting. Or, your reaction may be the opposite and you might simply shrug it off.

If your reaction is to panic, try not to. Though it can be unsettling, it might not be a big deal. But, you also shouldn’t ignore bleeding gums. If it happens frequently, it could be a sign of a serious problem.

From gingivitis to brushing too hard, there are a number of reasons why bleeding gums can occur. If you notice any blood, here’s a look at some things you can do.

Your gums might be bleeding simply because you are using too much force. If you’re brushing too hard or applying too much pressure when you floss, you could injure the gum tissue, which could result in bleeding.

Gum tissue is delicate, which means that you should avoid hard scrubbing or forceful flossing. Taking a more gentle approach to your oral hygiene practices can help you avoid damaging your gums, which will not only help you avoid future bleeding, but can also prevent a receding gum line and periodontal disease down the road.

Switch Out your Toothbrush

Regular brushing is the foundation of proper oral hygiene. Dentists recommend brushing at least twice a day; once in the morning and once at night.

While brushing regularly is important, so is the type of toothbrush you are using. If the bristles are too hard, you could actually be doing more harm than good. A lot of people assume that the harder the bristles are, the cleaner their teeth will be. However, hard bristles can easily damage gum tissue, resulting in bleeding. If you use hard-bristled toothbrushes for a long period of time, you also up your risk of periodontal disease. Plus, hard bristles can damage tooth enamel, too.

Trade in your hard-bristled toothbrush for one with soft bristles to avoid bleeding, as well other oral health problems.

When plaque isn’t removed from your teeth, it can accumulate around the gum line and eventually harden into tartar. Tartar irritates the gums and results in bleeding. Moreover, tartar can lead to gum disease and even tooth loss.

The most effective way to remove plaque buildup and avoid bleeding gums is to develop better oral hygiene habits. Brush twice a day with a fluoride toothpaste. Don’t forget to floss, too! Dentists recommend flossing at least once a day. You can also include rinsing with a fluoride mouthwash before you brush to really step up your oral hygiene game.

Watch What You Eat

Your diet not only affects your waistline and your physical health; it affects your dental health, too. For example, if you eat a lot of sugar and simple carbohydrates, your chance of tooth decay and gum problems are higher. Why? – Because sugar and simple carbohydrates create the perfect environment for plaque. As we said before, plaque buildup is the leading cause of bleeding gums.

A diet that is low in sugars and high in vital nutrients that are good for your teeth – like calcium – will help you avoid bleeding gums, as well as a number of other oral health problems. Now, that doesn’t mean that you have to avoid sweets altogether; just make sure that you are eating them in moderation, and that you brush and floss after.

It’s no secret that tobacco products are bad for your health; however, you may not know that they are bad for your oral health, too. Tobacco increases the risk of various oral health issues, including periodontal disease and cancer. Bleeding is often associated with these conditions, so it’s in your best interest to quit!